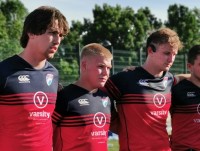 Eagle Impact Rugby Academy's trip to Spain was short and maybe not so sweet, but it was useful nonetheless.

The select-side program had been looking to revitalize its summer tours (in 2019 EIRA toured Ontario, British Columbia, Ireland, and Argentina) but the ripples of the COVID Times have made that difficult. Still, Head Coach Salty Thompson and his staff managed to get 29 players to Spain for a short trip set up by Varsity Tours (www.varsityse.com) and two games against the Spanish U18s.

It's easy to dismiss Spain's U18s given that their 15s team isn't so strong. But Spain's men's 15s team isn't weak, either—they're ranked #19 in the world—and their U18 program is organized and has performed well in the past. They draw from around the country, plus a few players in French academy setups, and had been training for some time when the EIRA players showed up in Valladilod and tried to get a couple of sessions in before the opening game on July 1.

"We didn't want to extend it too long," Thompson told Goff Rugby Report. "So we didn't have a lot of time together, and Spain were very good."

"They played at a pace I think our guys hadn't really seen," added Scott Bracken, who, along with Dai Morgan and Paul Keeler, formed the rest of the coaching staff.

The Spanish team was very quick to the ball and when they were ready to make a move, they moved. The EIRA players, not knowing each other too well, were of course slower to work together. But even on an individual basis, they weren't used to the pace of the game.

"After the first game we really worked hard on line speed and the tempo of how we play," said Keeler. "The score may not show it but we did make improvements and we did frustrate them."

"We were a little bit predictable," added Thompson. "We'd need to move the ball quickly but we wouldn't do a tip pass. We'd have a big break but we didn't have the support to connect that break to something else. Spain ran very good support lines, and when we turned the ball over they really punished us."

All of this was why the tour was useful. There were many things the players learned from in the games.

There were also a few additional reasons why the second game ended 61-15. Reading between the lines of the comments from the coaches, it was clear that they got no favors from the referee—Spain killed the ball well and weren't punished for it, while EIRA rolled away quickly and played in the Los Leones' hands. Additionally three yellow cards in the second game, including two back-to-back, didn't help. The EIRA players played hard, were physical, and worked to improve in the second half, but did struggle to play as quickly as Spain.

Still, the importance of playing these games is clear.

"We're going back to Spain," enthused Thompson. "We got guys vaccinated and into the country, the cost was low, the benefits high, Varsity Travel did an excellent job pretty much managing our team for us, and Valladolid was a great venue."

Meanwhile Keeler, never one to back off from voicing an opinion capped it off with a statement about the values of assembly and playing games at the age-grade level, saying that listing the best players isn't enough.

"Identification," said Keeler, "is not development."