Eagle Women 2nd in Dubai, But Can Do More: Analysis

Eagle Women 2nd in Dubai, But Can Do More: Analysis 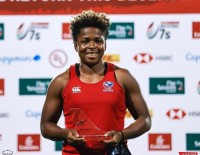 The stakes continue to get higher for the USA Women’s 7s team as the Olympics in Tokyo draw closer.

This past weekend's effort at Dubai showed all of that, as what looked pretty close to the Eagles' frontline team finished 2nd to Canada. If the USA is thinking of a medal, including gold, and they should, they will need to be able to beat the likes of Canada.

But ... what they also have to do is avoid what happened in the 2016 Olympics, when a lack of attacking flair and finishing ability locked the Eagles into low-scoring games, even against lesser opponents. The result was they were vulnerable to a bad-luck play. This part of the game the USA has shown they can take care of. They absolutely thrashed their non-Canadian opposition, playing only one relatively close game in the opener against France.

And really the close part of that game was the first half. The USA gave up a long try early on after coming very close to scoring. But they answered with a very basic attack off a scrum when Lauren Doyle saw the French come up unevenly and cut through the gap the uneven line created. A restart error (ball not 10 meters) led to France getting the free kick and exploiting some iffy tackling for their second try. after five minutes.

But that was it. For the next 11 minutes of play, and the result of the tournament (until the final), the USA put their foot down. It's as if they realized they couldn't afford any little mistakes, any lame arm tackles, which is, of course, true.

Play of the game. With the USA attacking and down 14-7, Doyle's pass was impeded by a French hand that grabbed Doyle's arm. The ball rolled desultorily along the ground, begging for a French player to pick it up. Had that happened, France likely would have scored to make it 21-7. Instead, out of nowhere, Ariana Ramsey a USA player raced in to dive on the ball and secure it for Doyle to clear out and Ilona Maher to pass out. Ramsey That same USA player got involved in that same movement, making a key offload when surrounded by three players. All of that led to Jordan Matyas scoring a try that made it 14-12 and a very, very different ball game.

Naya Tapper and Steph Rovetti both scored three tries in a good showing, although yet again a restart error gifted an early try to the opposition. Tapper looked like, the finisher of old; she looked strong and faster than a year ago. For Rovetti, well Head Coach Chris Brown singled her out.

“I’m really pleased with our progress from Madrid Sevens as we faced some challenging opposition this weekend," said Brown. "Stephanie Rovetti showed defensive comfort and decisive attacking with ball in hand."

Rovetti actually made several pretty important tackles. It's not that she didn't want to make the tackles before; she was just not in the right place. Now she reads the game better.

Play of the Game: With Japan getting an attacking lineout and a shot at making it a one-score game at halftime, Cheta Emba gathered the lineout overthrow, took off downfield and, when she was surrounded by four Japanese defenders, fired off a one handed pass to Rovetti for a try that essentially killed off the game. Emba, you will remember, was a player we at GRR loved four years ago and gelt should have made the Olympic team. She is a better player now—strong, probably faster, certainly fitter—and she is a crucial cog in the machine.

Play of the Game: Which of Nia Toliver's tries should we pick? When she came on against France in the opener she was immediatrly impactful, going the length of the field to score and give her side the lead. Against Kenya, the ICEF/View Park Prep product picked up where she'd left off in Mafrid. She was powerful, quick, and also played with that confidence

Play of the Game: The Eagles started out with a very nice team sequence to signal their intentions. The sequence involved 20 passes, six rucks, and one penalty. France never touched the ball, and the final phase saw four very unselfish passes close to the tryline as Doyle, Maher, and Heavirland (twice) all opted to pass rather than drive for the line. Emba scored untouched.

Brazil is a dangerous team but the USA put them away summarily. This is the sort of thing they have to do to win a medal.

So they lost the final. Canada, of course, joins the USA, Australia, and New Zealand as one of the top four teams in the world. But still, this was a USA team that had played together recently and wasn't, as Canada had been, suffering from coaching turmoil.

The Eagles started well. They defended an unexpected kick, Tapper forced a penalty in the ruck, and they quickly and smartly cruised upfield, with Emba making big yards and then later setting up Doyle. No problem.

But then Emba was caught flat-footed staring at a ruck and around the corner went Canada. Then right off the restart Doyle's hips are turned away from Delaney Aikens and she can only kind of hand-wave at the Canadian runner and suddenly the USA is down 12-7.

Doyle and Emba combined, with Tapper, to set up Doyle's second try, but that try was really won by the Eagles being more physical in the breakdown. Up 14-12 at halftime things looked good. However, with the benefit of hindsight we can now see that when Ramsey busted her butt to win the USA won ball on the restart and the USA had Emba unmarked on the wing, Heavirland's errant pass that didn't find her teammate was a crucial chance lost.

Skill breakdowns gave Canada the ball in the second half, but they also got a bad call when Canada got a penalty in the ruck when they clearly hadn't released the tackled player. Whatever ... Canada's running was with more purpose. And that started to create a situation in which the USA appeared a little more hesitant on defense. And when you do that, Charity Williams burns you on the outside, and she did, twice.

Be Prepared For When It Gets Tough

We here at GRR World Headquarters firmly believe in the benefits of playing tough opposition and playing tough games to prepare yourself for championship moments. That the USA won most of their games convincingly was a good thing, but they weren't prepared for the power, aggressive running, and intent of Canada, and they need to be.

“As a whole, we gave the ball back to the Canadians over eight times because some of our fundamentals were shown up," said Brown, and that is true. Simple passes that should have gone to hand didn't, and they cost the USA points. "These are not hard fixes but they are fixes that will require a lot of commitment both psychologically and physically. I know this group well and they are always up for it.”

Well, yes, they are. But the expectations are high for this team. They showed in Dubai they can play at the right level; they just need to keep showing it.

One More Thing About Dubai

Dubai is 12 hours ahead of the West Coast of the USA. It is very easy to become fatigued in Dubai because of that. While Canada was also struggling with this, we do think mental fatigue was a factor at the end of this tournament. The good news? They've got another tournament this coming weekend to make some fixes. And, really, Brown is right—they nail down skill execution when exhausted they should likely be OK.

Having said all that, Toliver probably deserves more playing time.

(Correction: We mentioned Ariana Ramsey, who was on the USA roster and that's who we thought we saw. Now we doubt that so we took out the specific mentions until we figure it out. Our apologies for the error. We had no roster with numbers and no on-site corroboration of names so we did the best we could. It wasn't good enough.)