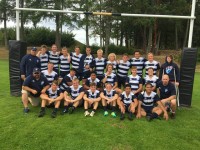 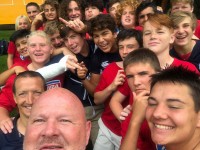 Eagle Impact Rugby Academy toured three countries on four different tours this past summer, and we’re having a look at how they did.

The location was picturesque and certainly had its wild side. Players were given warnings of apex predators nearby twice—once for a bear, once for a cougar.

It’s worth noting that these EIRA team, which drew mostly from the Western US, was missing some players who were selected for the HS All Americans’ trip to Canada (which was completely separate), and also for the overseas EIRA trips.

BC, meanwhile, was full of players and EIRA agreed to allow open substitutions. So the BC teams usually ran on a completely different set of 15 players at halftime.

While the results should be taken at face value, it is worth remembering that BC had a fresh group on at the break.

The EIRA U15s split their two games with the BC U15s. Coach Sean O’Leary took a relatively young team of players born in 2005 and 2006 and they learned a great deal.

Some of the older U15s moved up to the U16s, with Riley Elliot being one of the notable ones. The U16s were under the gun against a very deep BC U16s squad (this was the age-group that had open subs).

Program Director Salty Thompson said that while the U16s went 0-2, “it was great for the kids because they had a ton of playing time under a lot of pressure.”

The U17s did well, winning one game against BC’s U17s and one against an English touring side (coming back to take it 20-15). Overall they played a very solid brand of rugby.

The U18s had a slightly different experience. With some HS All Americans missing the team pitched up against BC U18s and also an English touring team

Both games were a loss, but once again provided experience game experience for these players.