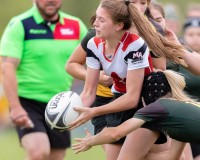 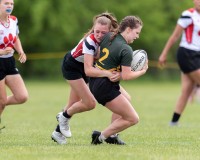 With the dynamic halfback pairing of Sophia Linder and Nina Mason controlling the pace of the game and playing some pretty physical rugby, Doylestown had the foundation of a win.

From 1 through 15 Doylestown was consistent and powerful, and often spectacular. Mason opened the scoring the first 45 seconds with a show-and-go and a burst through the gap she'd created. It might have simple to keep doing that, but Mason did well to use the talent around her, and it was considerable.

"A lot of the girls have been here for multiple years so we're all really close and we can always trust each other, said Miller.

The highlight of the game may well have been Mason popping a very nicely-taken drop goal over while under pressure. You don't see a lot of drop goals in open play in girls HS rugby, but Mason showed it can be done.

For Moon Area, Saturday's semifinal win will be some solace. They fielded a talented interior backline with flyhalf Alaysha Bable, limping and injured as she was, a player of some serious quality.

File this under "you don't see that every day." A drop goal in open play in a Girls HS final. Nina Mason of @DoylestownRugby under pressure and just pops it over. How's that @NicHeavirland @kelteralev ? pic.twitter.com/aAK4L11lBe