It has been a rocky journey getting this far for some teams in the Collegiate Women's DII Round of 16, but after this weekend, four teams will be one step closer to facing Davenport in the May 7th DII National Championship.

West Coast's Humboldt State and UN Reno; Gold Coast's UC Riverside, Southern California, UC Irvine, and Fresno State (the DIII champion who won an at large bid for the DII Round of 16); Cascade's Western Oregon and Eastern Washington; Florida's Eckerd; South Independent's Georgia and Tulane; Mid-America's Arkansas; Carolinas' South Carolina and North Carolina, Charlotte; and Capital's Salisbury and Mary Washington will be competing Saturday for the chance to continue on to Sunday's Elite Eight. The four victors of Sunday's matches will meet for the Final Fours on April 22-24.

Western Oregon is particularly impressed with how far they have gotten, especially because 95% of their team had limited experience with rugby at the beginning of the season. Since then, they have only lost one game.

"It was a very wild season. It was iffy if we were going to have a decent season or if we would just be developing players," Western Oregon president Alana Rudolph said. "Something happened and the girls massacred how they were working together and dominating the field."

The same can be said for many of the Round of 16 seeds. However, teams like Mary Washington, UGA, and Eckerd were able to finish their seasons with barely a scratch on their records. Those perfect records may be marred after this weekened.

Here is the lineup: 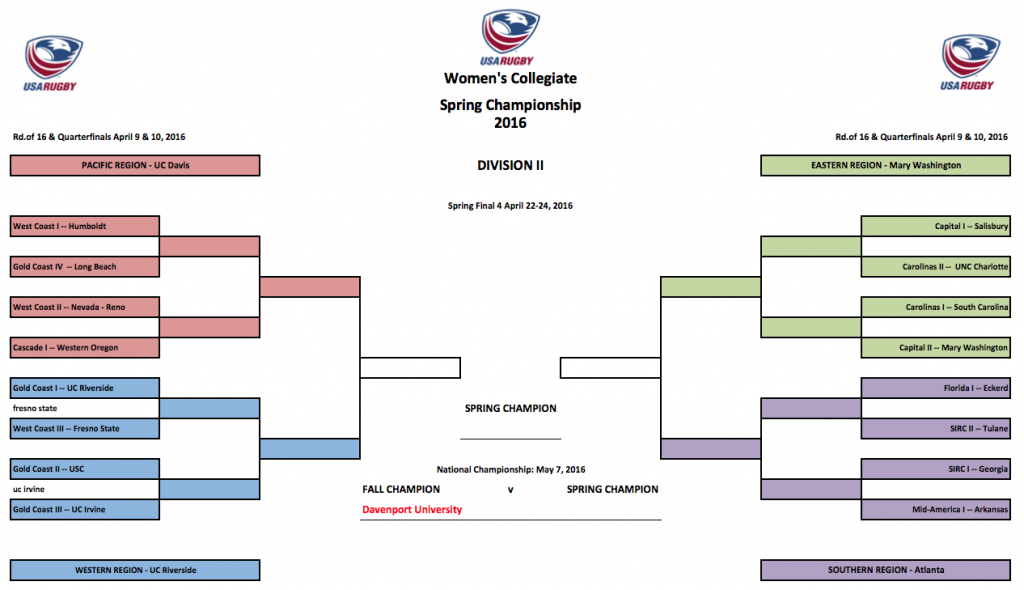