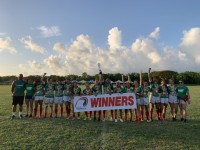 Mexico won the Women's U19 10-a-side championship at the Rugby Americas North U19 Championships, defeating Jamaica 22-0 in the final.

USA Rugby South took 3rd. Mexico shut out Trinidad & Tobago in the quarterfinals 34-0 before edging USA South 17-10 in the semis. That afforded Las Serpientes the chance to avenge a 12-12 tie with Jamaica from yesterday. They did.

For USA South, the loss in the semis was the Panthers' only loss of the weekend. They defeated Barbados 31-5 in the quarterfinals and beat Saint Lucia 24-0 in the 3rd-4th match.

Meanwhile, the men's competition had the day off. USA South Head Coach Mark Williams said he was very impressed with Mexico, which won their pool without giving up a point and also won their semifinal in a shutout.

"They are playing a really good pattern both offensively and defensively, and while a lot of their defense is because they hold onto the ball, they are making their tackles and defending well regardless," he said. "It will be a very tough match for us. We're coming together, but it will be tough."

USA South made the final with an improving team effort, and special notice should go to Iona College's Liam Anderson, Sumner County HS standout Alex Dillard, and Raleigh Redhawk Koby Baker, who have had strong tournaments. In addition, Williams praised his entire team for weathering a very difficult game againt Trinidad & Tobago in the semis. In that game the Panthers just could not get on the right side of the ref and were pinged for as many as 40 penalties.

We're not sure about the right number, but it was a lot, and still USA South pulled out an 18-5 victory. Williams said that composure will stand them well on Sunday in the final, which kicks off at 2:30PM Atlantic Standard Time, which is the same as Eastern Time right now.