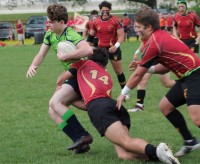 Brother Martin and St. Paul's will meet for the Louisiana State High School title next week after they won semifinals Saturday.

A surprisingly sunny day greeted Brother Martin and the Bayou Hurricanes at City Park in New Orleans. Brother Martin started the scoring at the four-minute mark when junior loose forward Andrew Lindstrom intercepted a pass and raced for the tryline. John Rink converted and the score stood at 7-0. At the 12-minute mark Rink showed off his pace after he took an offload from junior loose forward Andre Cook to race in. Rink converted his own score and it was 14-0 Brother Martin.

Bayou replied, producing a pass interception of their own, but Brother Martin responded with a nicely-worked movement that Rink finished in the corner.

As halftime neared Br Martin ran a back row play with No. 8 Sam Vallejo linking with scrumhalf Dom Cortello, who fed wing Tyler Anclade, and Anclade turned on the jets to score his team's fourth try. Ben Corvers converted the difficult kick and Brother Martin led 26-7 at halftime.

Bayou made some smart adjustments and came out motivated for the second half, surging on to score two quick tries and close to gap to 26-17. But Bother Martin re grouped and finished strong with the wings once again getting the points; Anclade and Rink each touched down. Both tries were converted by Rink and the Crusaders stamped their ticket the State Championship game with a convincing 40 -17 victory.

St. Paul's, meanwhile pulled off something of a surprise, beating a New Orleans Jesuit team that had shut them out 50-0 a month ago. This was a different St. Paul's team that won 38-12.

The Wolves scored by using their methodical rucking game against the well-organized defense of Jesuit, while Jesuit's best moments were when they moved the ball wide to space on the wing.  With their vertical attack, taking quick penalties when they were on offer, and a timely steal of a mauled ball from a lineout, St. Paul's scored two tries in the first half to lead 12-0. But two yellow cards saw the Wolves down to 13 players, and Jesuit capitalized, scoring two tries out wide.

Once St. Paul's returned to full strength, they used their midfield attack to set up multi-phase attacks and eventually wore Jesuit down, scoring 26 unanswered points to pull away from the Blue Jays.

As a result, Brother Martin will play St Paul's for the state championships next Sunday, May 2, at 2:00pm at the Gold Mine following the NOLA Gold v Toronto Arrows Major League Rugby game.