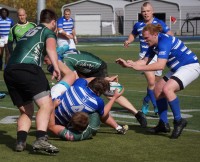 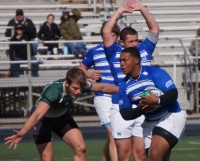 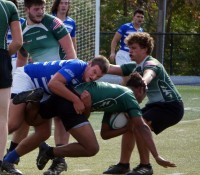 Part of the hybrid MCRC, Thomas More moved up to DII this year, and while the team lost a close game to Xavier of Cincinnati early in the season, the Saints kept on winning, ultimately taking the conference title this past weekend.

Thomas More Rugby is a school-supported program. That all happened in part because the president of the college from 2013-2018, David Armstrong, had helped get rugby to Notre Dame College. He was a rugby fan, and understood what rugby can do to attract students from Catholic schools.

They started playing in the MCRC as an NSCRO team, with the idea they would build sowly.

But, as often happens in these situations, things built quickly.

“Next thing we knew we had started a program and were looking at making the playoffs,” said Head Coach John Fox.

Active in the Cincinnati area rugby scene, Fox was brought in to coach, and he quickly built a team. He developed a relationship with an old buddy, Tony Flay, at the Crusaders International High-Performance Unit in Christchurch, New Zealand. Fox attended coaching school there, and several players have gone to Christchurch to develop their skills.

Newly up to DII, they hit the ground running, going 7-1 in the regular season and making the conference semis, whey they swept to the championship.

On Saturday, More put together an impressive performance, as tries from flanker Trevor Amback, prop Christopher Phillips, and center Joah Schricker staked the Saints to a 17-0 lead. Marshall clawed back with tries from Littleton Johnson and Nicholas Hermann, but from there, Thomas More took over.

No. 8 Hudson Montgomery scored the first of three in the second half, while flyhalf Damon Jones added two and fullback Tyler Urbina another as More cruised to a 51-15 win.

That set up the final against Xavier, who has held off Southern Indiana 21-14.

That had been a very physical and fractious match, however. Six players had received cards, including two getting reds at the end of the game. That meant no Zane Te Kanawa for Xavier on Sunday, and with injuries depleting a team that had only three on the bench anyway, they forfeited.

Disappointment for Thomas More, then for not being able to erase that 20-19 loss to Xavier in September, but a championship is a championship.

(The forfeit also highlights the difficulty in running two-game weekends for DII and NSCRO teams. By the end of the season, a roster can be considerably thinned out, making the final game not what it should be.)

Leading the way for Thomas More has been a young cadre of talent. This weekend’s team featured 11 starters who are freshmen or sophomores. More experienced is Damon Jones, the flyhalf who has captained the team for three years.

Max Pollard started at flyhalf and moved to flanker because of his field awareness and tackling. Montgomery has been a powerful force at No. 8. A big body, he probably projects as a prop at the high levels. As you can see, Fox has no compunction about moving players around.

Scrumhalf Brody Miller is an excellent example of that, a former flanker who brings that tenacity to his new position. Johnny Carmichael at center has been effective.

Now Thomas More gets to test itself against the rest of the country. Was the MCRC good enough preparation? We’ll find out.