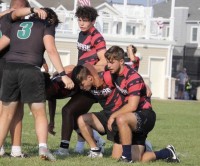 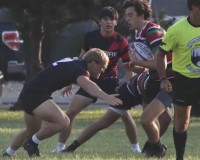 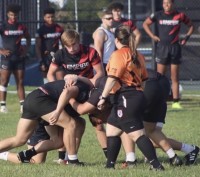 The 12 teams competing in the high school men's elite division at Surfside 7s were: Berks County HS Rugby, Shanahan RFC, PWRFC, St. Augustine Prep, Mystic River U-19, Minutemen, MD15, St. Joe's Prep, Explorers, Media Rugby, Coventry Wildcats, and West Shore United. In pool play, Berks first took on MD15 out of Pennsylvania and came away with a 19-0 win. Next up was Bishop Shanahan, also out of Pennsylvania, and Berks won that match 28-5.

The put Berks in the semis against Pennsylvania-based Coventry Wildcats, and in a closer encounter Berks won 17-12.

That set up the final with St. Augustine Prep of Ner Jersey, Berks for two tries from Baylor Kobularcik and tries also from Eli Ross and Diohnny Ruiz, and Berks came away 26-14 winners. Ross and Ruiz, both rising seniors, were effective finishers throughout the day, and Ross was also a massive force on defense.

"As the boys have been preparing for the NAI 7s in Utah next week, it was especially important to ensure we stuck to our game plan," said Berks County Head Coach Greg Stelluti. "We have been working extremely hard to be disciplined and stick to our structure. We wanted to stick to that structure for each game and ensure we had all of our kids playing multiple positions for versatility. They did a great job sticking to the game plan.

"When things start to go south in a game, they know to get back to the plan. That is exactly what happened in the final. They fell behind on some unlucky bounces but they did not panic. They went back to the plan and scored the next two try’s to seal the victory..

Playing for Berks at Surfside 7s were: