And the Player with the Most USA Test Match Wins Is ...

And the Player with the Most USA Test Match Wins Is ... 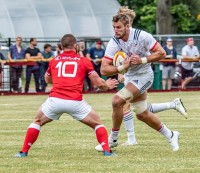 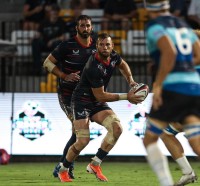 A couple of notes about Cam Dolan.

First off, coming back on the field after the lights came back on in the 62nd minute of last night’s one-point win over Chile, the players were coming out of a nice, warm locker room into cold and rain. It was Dolan (who had, wisely, donned a fresh jersey) who was cajoling and extolling his teammates to get going. They were down 14-12 at the time, and Dolan energized that team.

He played all 80 minutes and was as active in the last as he was in the first.

The latest in a long line of very, very good loose forwards for the USA, Dolan has his a few landmarks others could not.

Saturday he passed Todd Clever as the winningest USA player ever, playing in his 30th victorious test match. Clever achieved that mark in 76 games, Dolan in 59.

Most of the top players in US history have losing records because the Eagles have an overall losing record. But Dolan is 30-27-2.

Now part of that is because the USA schedule has changed over time. But it is worth pointing out that Dolan has played England twice, Ireland twice, Scotland twice, Japan four times, New Zealand, France, Italy, South Africa, Japan, Argentina, and Australia. He was the starting No. 8 on the USA’s first-ever win over a Tier 1 nation, Scotland. He played Samoa two times. When he came off the bench, they lost, twice. When he started, they won, twice, and he scored two tries in that first-ever win over the Samoans.

So, sure most of the victories have come against North- and South-American opponents, but he’s earned them.

Against Tier 2 or 3 opposition (and we’re counting Japan as Tier 1), then, he is 28-12-2. And that isn’t event counting the USA’s games against the Argentina XV in the ARC, in which Dolan scored a key try in a road tie to win the 2017 tournament.

In his 59 capped games Dolan also has scored 18 tries. That’s the most by any USA players except Vaea Anitoni and Joe Taufete’e. Those tries include the two in a one-point victory over Samoa in Spain. Three in a 42-17 defeat of Canada in Nova Scotia, and a key one against the Canadians in a tight 30-25 win in Seattle in 2019.

A smart, hardworking player who never backs down from the challenge the Eagles face every time they play, Cam Dolan is worth a little cap-tip.