Americans Overseas: A Couple Of Firsts

Americans Overseas: A Couple Of Firsts 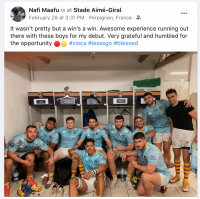 We saw a few firsts this week with American rugby players playing overseas.

Among those first was a first run-on for Nafi Maafu for USA Perpignan in France's Pro D2. Perpignan won 24-20 over Valence Romans.

Maafu first came to prominence when he was playing HS rugby in Tempe, Ariz. and with Eagle Impact Rugby Academy. He plays flanker and lock and is very mobile. He came on at 54 minutes to help Perpignan finalize the win.

And ... in the Women's Premiership in England we saw three USA players score for the Exeter Chiefs in one game. The only USA player not to score was prop Joanna Kitlinski, who came on in the second half of the Chiefs' 76-5 demolition of Durham. Rachel Johnson scored two tries and Kate Zackary scored one. Center Gabby Cantorna has been superb with her goalkicking and helped set up several of the Exeter tries. She kicked eight conversions and added a try for 21 points on her own.

64’| Quick feet from Davies and she feeds Cantorna for the try.

Greg Peterson played all 80 minutes at lock for Newcastle as they beat Harlequins 25-22. He had nine carries, ten tackles (the most on the team), and as many lineout wins (nine) as the rest of the Falcons combined.

AJ MacGinty kicked ten points and logged 12 tackles at flyhalf for Sale as they beat defending Premiership champs Exeter. Exeter led 20-15 with about 11 minutes to go before a Sale try tied it up. MacGinty's conversion put the Sharks ahead, and the USA flyhalf iced the game later with a penalty.

That was a crucial kick, too, because with the hooter some four minutes gone, Exeter got a penalty right in front of the Sale posts. The Chiefs, of course, had to go for the lineout and a try. They fumbled the throw-in and Sale ran the ball into touch and took the win.