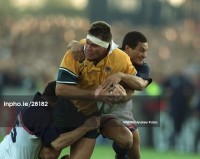 One of the most respected and feared rugby players in American history, Vaea Anitoni remains one of the greatest Eagles ever, and that won't change.

A friendly, engaging man born in Tonga and a naturalized American, Anitoni dedicated his life to playing for his beloved San Mateo Rugby Club, which he led to two national D1 club championships, and to the United States, which he represented with distinction.

Anitoni was usually a flyhalf for San Mateo and was the man in charge for what was one of the very best clubs in the nation. For the USA he was on the wing, where his pace and understanding of space broke open defenses all over the world. In his 46 games for the United States, Anitoni scored 26 tries. When he retired from the Eagles he was the only USA player in double figures in tries.

Even now, that record, set between 1990 and 2000, stands, and while it may finally be overhauled in the next couple of years, don't bet on it. He was a wing who could pass and set up his teammates, he was a strong defender, and a dedicated Eagle. Anitoni was also a brilliant 7s player, suiting up for the USA throughout the 1990s, including the 1997 Rugby World Cup 7s where they went 4-3 and won the Bowl, as well as Dubai, Hong Kong three times, Taiwan, and Besagne, France.

Vaea Anitoni was the first Polynesian-American player to be named to the US Rugby Hall of Fame, and his inauguration was broadcast live on Tongan radio. His Eagle record is pretty much unimpeachable. At every level he performed, and still, in many ways, he has no equal.