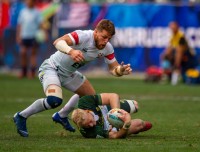 Plucked out of almost obscurity into the US national 7s team, Stephen Tomasin may have been a little lucky, but he turned that sliver of good fortune into an impressive career with the Eagles.

Tomasin might not have been elevated quite so quickly if his coach at San Diego State, Matt Hawkins, hadn't also been the coach with the USA team. Tomasin wasn't big or super fast, but what Hawkins saw in him quickly became apparent. He is an excellent athlete, a smart player who continued to learn, and he was, and is, very versatile.

Tomasin is a 7s halfback who can play center, a 7s flyhalf who can play hooker, a short guy who can win lineouts. He taught himself to kick, and is now 6th all-time among USA players on the Sevens World Series (83 conversions to go with his 90 tries). He became faster and showed he can be a breakaway try-scorer. And his work over the ball and his overall defense have always been stellar.

Add to that the fact that Tomasin has become a leader on the team and often is given captain responsibilities when Madison Hughes isn't available, you've got a player who took every opportunity given to him and improved on it with hard work and intense study.

In 2019 Tomasin was nominated for the World Rugby 7s Player of the Year, and while he didn't win it was a justified nod to a player who often does the unglamorous work, but helps his team win.