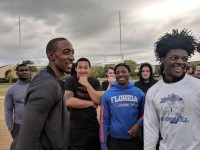 Anyone who has been reading these All-Time Americans list articles has got to have been waiting for this one.

Perry Baker is one of the very, very best 7s players ever in American rugby. He came to prominence as a teenager parachuting into the Daytona Beach club and helping that club play at club nationals. He was young, very skinny, but multi-skilled and a game-changer.

He pursued football, but it seemed clear that his future was in rugby. Baker eventually joined 1823 and Tiger Rugby in Columbus, Ohio and that program gave him more minutes and more exposure to different coaching. And then he joined the USA 7s team. Forming a unique one-two punch with Carlin Isles, Baker showcased a long strike and quick acceleration that allowed him to score from 100 meters out. His superb fitness allowed him to do that repeatedly throughout a game and a tournament, and he also could play a little defense. He worked on his strength abd his technique to better handle contact and also worked on his kicking, becoming an all-around threat.

Hampered by injury in the 2017-18 season, Baker scored "only" 37 tries, which tied him for 4th in the world. As he had every year before, he was on the DHL Impact Player team—one of the seven players deemed by DHL as having the most influence on their games. His try-scoring dropped thanks once again to injury in 2018-19, but he was a DHL Impact Player once again while the Eagles finished 2nd in the World Series standings.

These are simple but obvious numbers. Baker joined the USA 7s program and immediately started scoring tries, and he wasn't taking try-scoring chances away from Isles so much as adding to them. When both players have been (for the most part) healthy and available, they complement each other. In 2014-15, they combines for 60 tries (32 for Isles and 28 for Baker), and in 2017-18 they combined for 86.

In just 243 World Series games, Baker has scored 205 tries, a strike rate that surpasses five of the seven players ranked ahead of him on the all-time list. Only Santiago Gomez Cora and Seabelo Senatla scored tries at a faster rate.

The first American player to get a world Player of the Year award from World Rugby, Baker did it twice. In the six years before Baker joined the USA 7s team, the Eagles never finished better than 10th in the overall standings and made the top three in only two tournaments, winning one. After Baker joined, the USA finished 6th three times, 5th once, and 2nd once, and won three tournaments, finishing in the top three 14 times. None of that is a coincidence.