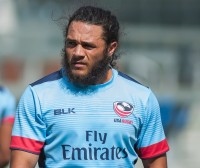 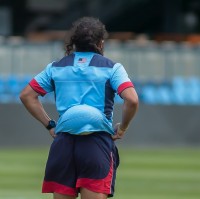 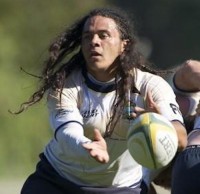 Our series of All-Time Americans continues with a player who, it seems, needs to prove himself every time there's a new national team cycle.

Mike Te'o is something of a unique player, and as such sometimes difficult to categorize—and you know how coaches like to categorize.

What is true is that rugby teams Mike Te'o played for won games, and continue to win games. Not especially tall, and shaped in a way that makes you think he's a front row player, Te'o is in fact an enormously elusive and speedy athlete with an outstanding vertical leap, an understanding of how to attack, and a nose for tryline.

IN PRAISE OF MIKE TE'O

Te'o first came to prominence as a u19 player who was good enough to play for the Belmont Shore men's team. He played hooker and flanker, doing so for the USA U20s, a team he helped lead to a 2012 World Junior Trophy championships. But quickly his pace and attacking flair put him further out into the backline, seeing him suit up as scrumhalf, wing, and fullback. Quickly Te'o became a star player for Belmont Shore and his ability to create chances out of nothing were perfect for 7s.

He was capped for the USA in 7s, but he didn't really latch on permanently with that team. Instead he did things like lead Belmont Shore to two national club 7s titles (one in which he was MVP), and be a standout for San Francisco at the 2013 World Club 7s, And all of that finally made it clear that the guy might look a bit like a hooker, but he is a back. He earned his first 15s cap in 2016 and has continued to make an impact since then.

In his 28 games for the Eagles 15s team he has scored 16 tries, putting him amongst the leaders and on track to be the #2 among USA backs if he gets a few more chances. And he has accomplished that despite missing about a year due to an ACL tear—an injury that he battled hard to overcome.

Te'o has had many special moments as an Eagle, including coming off the bench against Tonga in the 2019 Rugby World Cup and scoring two tries at a time when the USA was not palying its best. But another 2019 moment stands out for us. The USA win over Canada in Tukwila, Wash. in March of that year was a tight one, and ended with Ruben de Haas scored the game-winning try off a scrum. But none of that would have happened were it not for Te'o. Repeatedly, with his team's back against the wall, Te'o pulled off runs down the left side that put the Canadians on the defensive, and set the USA up for the win. He didn't score, but the closing minutes of that game were some of his best.

At only 28 Mike Te'o is a seasoned professional with San Diego in PRO Rugby, then the San Diego Legion, and now the Utah Warriors. Whether he has the classic profile of a world-class wing or not, he's a special player. He can fill in at multiple positions—and if you're down a flanker you can put him in there for 15 minutes without a problem—and he will keep making plays.