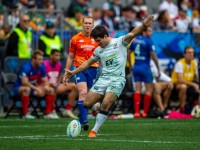 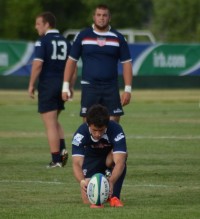 Before he was old enough for serve beer let alone drink it, Madison Hughes was on the American rugby radar.

His zenith as an age-grade player had to be helping the USA win the Junior World Trophy in 2012, leading the team in points as he suited up with future Eagle teammates Will Magie, Kingsley McGowan, and Mike Te'o. Hughes was the MVP of the CRC 7s as a freshman as he helped Dartmouth to victory, and his ability to elude tacklers and set his teammates free caught the eye of USA 7s Head Coach Mike Friday.

Hughes was still in college when he was put on the USA team, and he was quickly named captain. Despite being one of the youngest players on the team, he commanded respect and helped the USA team to its most successful seasons ever. Despite his small stature, Hughes is a giant in many ways. He is strong, he can play a number of positions at a world-class level, and he has been instrumental in keeping a team of very different personalities a cohesive unit.

As a 7s player he's a points machine, but he is also one of the USA's best and most prolific tacklers.

His 1,510 points scored in easily the most for the USA in Sevens World Series action. He led the World Series in points in 2016 and has been in the top three another three times. In 2015-2017 he was in the top five among tacklers in the entire World Series.

Since they started tracking tacklers in the World Series in the 2014-15 season, Hughes has made more tackles than anyone else in the world. He is 6th all-time in World Series points scored among all players. And that doesn't say anything about how he has set up his teammates, especially Perry Baker, Carlin Isles, and Martin Iosefo.