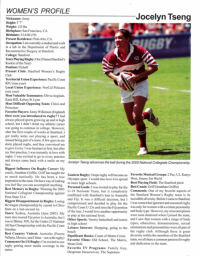 Jocelyn "Jossie" Tseng was a scrumhalf with intelligence and an excellent pass and vision who helped Stanford to national prominence and followed that up with success on the international stage,

Tseng took up rugby at Stanford and that decision coincided with Stanford's most dominant period in women's college rugby. The Cardinal made the national D1 final all four years (all against Penn State) and won three, in 2005, 2006, and 2008. She was the starting flyhalf as a freshman in 2005, helping Stanford beat Penn State by 47 in the national final.

Able to play both flyhalf and scrumhalf, Tseng was really a #9 for the Eagles. But her versatility was useful to her college and club. She went on to join the Berkeley All Blues while in med school and twice the All Blues won the Women's Premier League while she was with them.

A smooth operator who didn't make dumb mistakes and who always put her teammates in a better position to succeed, Tseng played in two Rugby World Cups over an eight-year international career before retiring to pursue her career as a doctor.