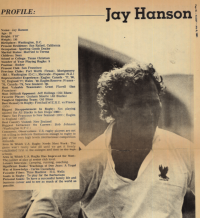 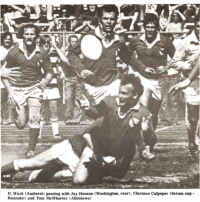 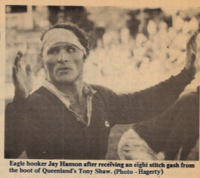 Jay Hanson’s story is a classic one of the early days of the modern era of American rugby.

He found rugby where he could, and continued to perform at a high level whenever he did so. He played in high school in Maryland when that wasn’t really a thing. He attended TCU and found a club in Fort Worth to play for.

Back on the East Coast he started at flanker for the Eastern Rugby Union against Five Nations champions France, setting up the try that gave the ERU an astounding 6-0 at halftime (France went on to win 12-6, but still). Hanson converted to hooker and was capped sevens times by the USA at that position, touring three times with the Eagles.

In 1976 he moved to California to play with the San Francisco Rugby Club, and did so for the next 14 years, playing also for the Northern California Pelicans and the Pacific Coast Grizzlies.

Like a lot of players in the 1970s, Hanson found few chances for full international caps, but that didn’t mean he wasn’t an international-level player. A dedicated rugby man throughout his career, Hanson epitomized the kind of intense desire the game engendered, and demanded.

His quote in the Rugby Magazine profile above shows exactly what we mean. When asked to comment on the game in America in 1981, Hanson pulled no punches, saying: US rugby players are not yet willing to dedicate themselves enough to rugby to play at the very high levels international competition demands.”