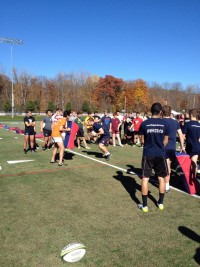 The first round of Eagle Impact Rugby Academies has been completed as High School All American Head Coach Salty Thompson and a team of coaches got things kicked off over the past weeks around the country.

The second season of EIRA assemblies started in Southern California, and then Thompson visited Rockaway in New York, Seattle, Orlando, Fla, Culver Academy at Indiana, the Carolinas, and Texas.

More states are getting involved, with Thompson labeling SoCal, Seattle, Indiana, Carolinas, and Texas as the core academies, with other satellite academies sprouting.

In Florida, the event was more of an open camp, with Thompson casting a wide net to see what talent is there, but also targeting players out of the Florida Juice select-side program. The other academies are more invitation-oriented.

“In Rockaway we wanted to see the players who had done well in the Northeast RAST [Regional All-Star Tournament] and the good news is that we confirmed that the talent there is strong, and six guys will be invited to the HS All American winter camp,” said Thompson.

The EIRA events are not selection vehicles - they are designed to take higher-level players and help hone their skills and understanding of the game. That, in turn, will give them a better chance to succeed at the international level, or at least allow them to help raise the level of play at their home clubs and school teams.

JD Stephenson of Lindenwood University joined Darrell Knowlton at Knowlton’s Culver Academy in Indiana, which looks to be a good central base of operations for EIRA in that state.

More work is being done in Texas, Pennsylvania, North and South Carolina, and New Mexico.

“What’s been great is that the college coaches that come in understand that they are there to impart knowledge, rather than push their programs,” said Thompson. “It was great to see [UCLA Head Coach] Scott Stewart at the Southern California sessions.”

The EIRA works to not only develop players, but give them time to develop. Thompson said some payers have come in who aren’t executing the drills or skills well, but are clearly working hard and showing the commitment. When they have stuck with the program, those players have gotten better. That also means that coaches may need to be patient with a player, too, he said.

“ids want success right away, and maybe coaches do too,” Thompson explained. “But for some it takes time. With EIRA we’re in a situation where we don’t just rule out a player for one reason or another. We work with him and develop those core skills - catch and pass, ball presentation, other fundamental skills. If we work with 600 to 800 kids on this, then we start to develop a real pool of talent for the High School All Americans and U20s, but also for high school and college programs.”