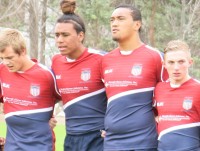 Standing at 6-5 and weighing 225 or so, George Alexander Blake "Leki" Fotu is a big unit, but he's getting bigger.

Size isn't everything, of course, but Fotu is quickly getting to a point where he can become a huge factor in games. And here's the kicker, he's only 15. Fotu does have some developing to go as a lock in elite rugby. He was still green when he toured Europe with the JV HSAA team this pas spring. But he has the pedigree - both of his brothers players with the HSAA team - and the desire.

"He is a monster," said Thompson. "He's one of the finds of this year. He is working really hard, doing a lot of good work in the line outs. He's played every minute for us. He's just been tremendous."

Out of Peninsula Green in Northern California, he can be an intimidating presence.

"He came out of the JV tour with good evaluations; he's got good go-forward, and is very good in the air," added Thompson."He's a good, hard-working kid, very low-maintenance."

At the Great Northwest Challenge, Fotu and the Northern California team found out that size and athleticism doesn't always win games, as they were undone by a very cohesive Washington team. After the game. Fotu said he learned a lot, and vowed to keep working. That, in essence, is why he looms large in American rugby - not just for his size, but his attitude. Fotu gets his regular rugby work at Peninsula Green, and has had multiple opportunities this season to play at a higher level. If he keeps on that path, he could be something special.

George Fotu is out Aircraft Charter Solutions Boys Player of the Week.