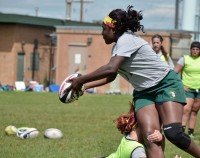 The Midwest women’s age-grade select sides, the Thunderbirds, are right in the middle of a trip to the Canadian prairie.

The Thunderbirds U20s defeated Manitoba U18s 67-0 and Saskatchewan U18s 41-0 in shortened games on Saturday. The U23s will face the Prairie National Women’s League team later on Saturday. Then they do it all over again on Sunday.

Leading the way for the Thunderbird U20s was captain Stephenie Snoeberger of Wright State, and Northern Iowa center Angie McCardle.
McCardle’s coach at UNI, Steve Murra, is heading up the coaching staff and was quick to point out that Roger Riley, a Kiwi now coaching at Winona State, did “90 percent of the work” in organizing the team.

After a brief assembly in Minneapolis, the team took the bus to Brandon, Manitoba, where the mosquitos, so it’s told, are the size of B52s. The team has handled that well so far and the U20s showcased some impressive ball handling and all-position skills.

“We want to put these players in position to play international rugby, and since we struggle to beat Canada, let’s go to Canada,” said Murra. “It’s a good test for them. I think the Manitoba and Saskatchewan teams are younger than us, so that’s a test for them, but our U23s will have their hands full with Prairie.”