WVU Holds On to Win Keystone

WVU Holds On to Win Keystone 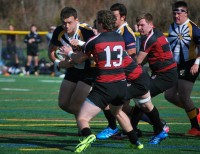 West Virginia University held on in a torrid second half to defeat St. Joseph’s 22-17 and win the Keystone Rugby Conference.

Both teams had dominated their respective divisions within the Keystone and were coming off impressive semifinal wins. WVU had boasted a very solid defense while St. Joe’s a was a little more adventurous in attack. But Saturday it was about who could handle the wind, and, oddly, every single point was scored into the breeze, as teams without the wind advantage did a better job of controlling possession.

WVU started into the wind and mixed a strong forward effort with speed out wide.

“It was probably the best I’ve seen us play,” said WVU Head Coach Richard Glover. “We scrummed really well and out lineout was functioning. Everything was going according to plan.”

Freshman WVU wing Luke Ellis scored out wide early and then the forwards mauled one over. The WVU pack punched in another and Ellis torched the Hawks for his second try to make it 22-0.

“Our forwards were doing what they needed to do and we used our backs well,” added WVU’s Joe Watson. “I though our scrumhalf, Kris Wilson, did a nice job holding their scrumhalf, Jimmy Wolfer, in check. We weren’t committing too many penalties. It was just working.”

And then in the second half things changed. St. Joe’s retained the ball more, and WVU started committing penalties - 15 in the second period.

“They weren’t 50-50 calls, either,” said Glover. “They were very obvious. It’s something we’re going to have to look at.”

With the penalties and a couple of injuries putting them out of synch, WVU started giving up tries.

“The first try was basically our penalties setting them us,” said Watson. “The other two were just really good work from St. Joe’s. But we were confident we’d hold onto the lead.”

The victory gives WVU the Keystone Conference Championship, and also sets them up to play Stony Brook, who beat Binghamton handily for the Empire Conference championship. That game will be played as part of the ACRC Bowl Weekend.