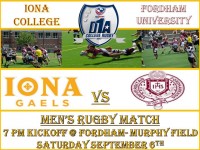 There are few rivalries like a rivalry between Catholic schools and it’s a good one this weekend as the Jesuit college of Fordham takes on the Christian Brothers college Iona in a non-conference ACRC game.

While these non-conference games have no bearing on the standings, they do have a bearing on rankings - not only between individual schools, but conferences as well, and thus a bearing on what teams play each other in the bowl games in November.

So if pride wasn’t enough, there’s more of a reason to win.

Fordham was 3-6 in the Empire Conference in 2013, just a shade behind Ioan, which finished 3-5-1. Iona has moved to the Rugby East, but both teams are looking to move up with improved rosters.

“One of the things we have going for us is that we get kids from Jesuit high schools, and they are consistently good rugby players,” said Wright “We won’t necessarily out-athlete a team, but our players know how to play.”

Wright said he had a good mix of players and an impressive halfback combination of AJ Shoemaker (late of Loyola in California) and Tim Moran, previously of Gonzaga. Both are young and worked their way up from the B side.

Lock Mathew Wester leads the squad from the front at lock, and up front they are more experienced.

The same story is told at Iona, where new Head Coach Bruce McLane will start a back line that, almost to a player, is made of players new to their position.

Andrew Rossi, a flanker-hooker, captains the team along with senior prop Brandon Wynne (converted from lock). John Cullen is a lock who was a wing, while some young products from Xavier HS and Bishop Hendricken could make an impact.

“We will have a good lineout and a good scrum, and we will play solid defense,” said McLane, who brought in St. Mary’s Head Coach Tim O’Brien to give the players some pointers on attack - both Iona and St. Mary's are called The Gaels. “I think our set piece will operate about as well as it can, but we have a lot of players in different positions.”

Wright, who played for McLane at Xavier, said he has no doubt that Iona will be solid up front, but he thinks “we can make some noise” in the Empire.

“Either way,” said Wright,” this will be a really good test for us. Iona will show us how we match up.”