Player of the Week - Wes Parker

Player of the Week - Wes Parker 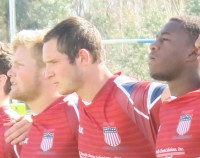 If you research where most top American rugby players come from you will start to see some states mentioned repeatedly; one you won’t see often is Kentucky.

But Wes Parker is looking to be one of those rare Kentuckians that makes it big in rugby, and perhaps boosts the sport in the Bluegrass State in the process.

Parker toured with the High School All Americans this summer, and is now enrolled at Lindenwood University, where he is majoring in Exercise Science. The 6-3 loose forward starred for the Lindenwood ends in their defeat of Indiana this past weekend and was also an effective impact sub for the 1sts in the same fixture.

“I’ve just been here a couple of weeks but I am fitting in well,” Parker told Goff Rugby Report. “I started playing my freshman year in high school. My dad played rugby for a while and it was really fun. By my junior year we started to get more serious, and started traveling around to play some better teams.”

After his junior year at St. Xavier, Parker played on the Kentucky team that entered a select side in the Midwest Regional All-Star Tournament, which is where HSAA Head Coach Salty Thompson saw him. Even though Kentucky struggled in the tournament, Parker stood out.

“I had no idea at the time that there was a High School All American team or who Salty Thompson was,” said Parker. “But I got invited to a camp and then to the tour to Argentina. After that, I decided I would concentrate on rugby instead of football.”

The outside linebacker had entertained a few scholarship offers from small football programs, and an invitation to walk on at some larger programs, but decided last fall to make rugby his college sport of choice.

“It’s a blast,” he said of the rugby. “Being able to get on the national squad and go on tour overseas is a bonus. I realized I might be able to go pretty far in rugby, and I knew with football that after college I’d be done.”

So rugby it was. Parker toured with the HSAA team a second time this past summer, and said the team learned a lot about playing a full 80 minutes against tough opponents.

“We played well in the first half against Argentina and Italy, but then we started maybe getting satisfied,” he said.”We started missing tackles. I think overall the tour was a success because we learned a lot and fixed our mistakes against Uruguay. But it would have been nice to do that against Italy. We know you can’t let up at that level.”

Parker said playing for the HS All Americans is intense, but top college rugby is something else - especially given that you are playing against older and more mature players.

“It’s an adjustment,” said Parker, who looks to be a factor for Lindenwood for some years to come. “But I have usually been able to play up to the competition, especially on defense. I know I’ve got to be fit and keep learning.”

Wes Parker is our Goff Rugby Report Player of the Week presented by Aircraft Charter Solutions.