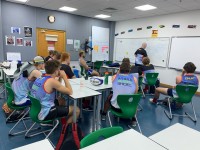 The North American Lions finished Day One at the Dubai 7s Boys International U19 tournament winning both pool games.

The Lions, which is made up of select-side players from the USA and Canada, are run by Michael Cresslerand coached by Salty Thompson and Jack Foley. The main feeders are Atlantis, Eagle Impact Rugby Academy, Utah Rugby Academy, and Upright Rugby. Scheduling conflicts this year made it difficult for the Canadian players to be available, so this year's team is all USA.

The players have had a hardworking few days in Dubai preparing, working out on the fields and in the classrooms of the Universal American School in Dubai.

Generally the players get up before 7AM and are in the pool by 7. After breakfast they're on the field for a morning session, and after that they might observe one of the international teams training fo the World Series Dubai 7s. Following an early lunch, they're back on the field and in the late afternoon, when it gets really hot, they're in the classroom.

The intensive training, said Cressler, was necessary because of some serious jet lag. Dubai is 12 hours ahead of the West Coast, and nine hours ahead of the East Coast, so every player pretty much reverses his internal clock. For young players, especially, who need their sleep, this can be brutal.

So the sessions were designed to get them moving quickly once they woke up, and get them used to the heat and humidity as well.

Against Brussels, it was once again three tries to one; the only difference was Brussels converted their try and the Lions converted none. Rhys Jones, Nolan, and DeVilliers touched down.

Next up will be Travel & Sports Elite, which went 0-2 against KZN and Brussels. So there's a really good chance that the Lions will win their pool.

Also 2-0 after Day One: Central South Africa Invitational, All-Stars, African Knights (the Knights and All-Stars play each other on Friday), Peregrines, and NW Barbarians. If they win their pool, the Lions will play the 3rd-best 2nd-place team in the quarterfinals.