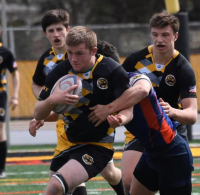 In our tracking of college commits for the fall semester, we've got a large number of players from the Marin Highlanders out of Northern California connecting with college rugby programs all over the country, from Oregon to Wisconsin to Arizona to West Point.

It's a diverse group of athletes with flyhalf Evan DaCruz being 5-9, 160, and flyhalf Ruiairi Bentley (who has a superb boot) at 6-2, 205. Look for McLane to shift some of these things around.

If you haven't found a place yet, you can be seen by coaches by using our free HS player data base: Use The GRR Recruiting Database To Be Seen

See all our Commits reports here >>