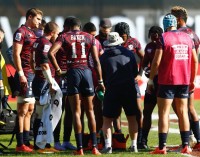 They battled to hold off Spain, exploding for three solid tries in the first half and gritting their teeth through the second. They took apart Jamaica in a game that started in a worrying way, with the Jamaicans controlling possession. But the Eagles were patient, and then explosive.

Then they beat Argentina, which doesn't happen all that often, with clutch second-half tries from Perry Baker and still-green sensation David Still.

But a 3-0 started turned into a 26-7 humbling against Australia, and while the Eagles beat Canada, they lost the 5th-6th game to a physical French side.

Head Coach Mike Friday knows he's got some young players, but it's not just that.

"Understand we are also asking some veterans to do different things as well," Friday told GRR. That, he says, puts some of them into a sort of rookie status, too. Baker is a midfield man. Kavon Williams is a playmaker and captain. Steve Tomasin is being asked to do a number of things.

"That being said the issue in our attack was because we were not working hard enough from the inside to look after our possession, resulting in our outside players coming in, meaning we lose our width and then have to work even harder to keep our possession," said Friday. "This resulted in some ineffective rudderless attack as well as some of the unforgivable handling errors and failure to recognize when we had to bounce back. It’s an easy fix if we work hard early from the inside and our outside guys trust them to get there."

The younger or newer players are learning that everyone in a World Series tournament, even supposedly less-regarded Spain or upstarts Germany are athletic, fit, and quick to pounce when support is slow.

"With where we are a group we have to expect and accept their will be mistakes as the boys learn and we can hopefully keep these to a minimum and that they are not big momentum-shift ones!" added Friday. "I have no doubt as a group we will continue to evolve and get better but as a program we have to accept that the USA rugby community expects a top 4 finish in competitions which we need to see as a challenge and opportunity and meet head-on."

Perry Baker played in his 50th tournament, running out onto the field alone in the first game, the one against Spain, as a gesture of honor from his team. One of the most influential American rugby players ever, Baker is taking on a bit of a new playing role with the team and it's perhaps a little less glamorous, but he's working hard at it.

After finishing 6th in Málaga, the USA remains 4th in the World Series, which isn't bad considering we're talking about this being a rebuilding period. And remember that you choose your best seven out of nine tournaments for the scoring.

As for positives within the team, "defensively we did well in our sets and from a contact recognition perspective in defense we were physical causing a lot of problems," said Friday. "We didn’t  always get the rewards for our efforts. The majority of tries scored against us were from our attacking shortfalls in transition as opposed to poor defensive sets."

The new guys are showing flashes. Aaron Cummings and Chase Schor Haskin, in their first tournaments, made a few mistakes, but, said Friday, "bedded in well and showed good physical presence and contributed both side of the ball. Lots to build on over next 12 months."

Newer players like Logan Tago and David Still (who both got on the scoresheet) are developing. They are inexperienced in rugby but physically able to hang in there.

"They will continue to get better and we all need to be patient and supportive," said the coach.

Faitala Talapusi is back after some difficult injury problems, and it's easy to forget he's just 21. And captain Kevon Williams is not only leading well, but playing some of his best rugby.

"His acceleration in the middle of the pitch is becoming a real threat especially as defenses currently are over-marking Perry and Carlin, and he is the beneficiary of that added space," said Friday. That, of course, is how you score in rugby—find the place where the defenses aren't. In addition, Williams "is growing in confidence in the pitch as a leader and communicator but also his tactical understanding evolving from being more than just a fast guy. He had worked hard on his conditioning to enable him to operate for longer in each game and is now able to go hard if needed for 14 minutes, which is a credit to his work ethic."

The USA is in Pool A with South Africa, Spain, and Samoa. Spain is the host nation and is always tenacious. Samoa is a bit of a wild card, but certainly can pull out great performances. And South Africa? They haven't lost yet, going 6-0 in each of the first three tournaments of the 2021-2022 season. In fact, the last time the Blitzbokke lost a World Series 7s game was in the Bronze Medal final on Mach 8, 2020 against Canada in Vancouver. Since that game they've won 30 games in a row.

The Eagles will have to be at their best to break that streak. They've been working on their attacking shape and the work rate to get into support, and thus allowing wide players to stay wide. Friday said he wants more players to be able to recognize when defenses have over-pursued.

"We will also pay attention on the detail of our tackled player/ball carrier so we can be more dynamic in ball presentation when we may have allowed ourselves to get isolated or need to but time for our cleaner," he added. Those ruck penalties can be a killer.